GF in Niagara Falls, ON

I was lucky enough to have a few days off in between school, and camp--I traveled to Niagara Falls (Canada side) and had a few days of adventure and relaxation. I am happy to report that the entire trip was Gluten-Free and allergy sensitive. I wanted to post my experience, so that other families traveling to Niagara that are working on a GF or allergy-aware diet, will have some sense of direction. I found the city amazing, and very knowledgeable; a far cry from my last carribean vacation when I learned the phrase LIBRE DE GLUTEN and still got responses like...No seniorita, there are no flowers in the soup.

So where to begin...on the way up, it was nothing fancy, but breakfast was apple sauce from a Wal mart we spotted on the drive; of course, no road trip is complete without a million Timmy's stops.

There are a surprising number of Starbucks locations as well, that was a special treat because they have soy milk, so I got to have lattes, americanos and pike's place, OH MY! 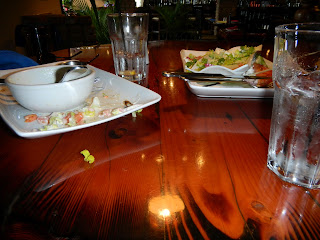 Once we got into Niagara we were ready for lunch; we had been tipped off that the local ma and pa places were a much better way to go than the touristy stuff; what a great tip that was! We chose a Greek place; the name is escaping me, Kitikoukous or something else amazingly fun to say with lots of hard k sounds. (Even on holiday I never forget my communication-training roots).

The waiter was so friendly, and had all the time in the world to chat about my allergies. He checked 3 times, about 3 separate ingredient allergies for each dish I ordered...all turned out to be safe bets on the chef's good word. So I ordered: A lemon-chicken-rice soup; it was so creamy I actually had the poor guy double check that there was absolutely no dairy...sure enough, none whatsoever. A GFCF miracle. I also had a skewer, totally GFCF and delish, and a side Greek salad. All in all, we ate so fast it must have been good; did not even stop to take a picture until I was just about finished. THAT good.

Next up we went to check into the hotel; walked up and down Clifton Hill and the strip outside our hotel to scout out some allergy friendly locations to eat at over our stay. Our first stop was Starbucks and for how many there were in Niagara, you would think they would be a little more allergy aware. I ordered a soy-frappaccino and got it served to me with whipped cream...then they tried to just "scrape it off"; I was quick to inform them that that was not going to work for me. They were apologetic, but proceeded to roll their eyes as I turned away (thank goodness for travel partners who look out for you :P). Considering how much time I spend at Starbucks in general life, I was not impressed. 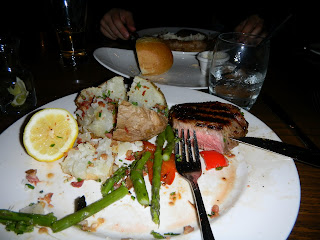 That night we decided dinner would be at Old Faithful; that's what we call the Keg  because it is always safe, they are always amazing about allergies, and it is always delicious (even without gluten or dairy...and their bread...just fyi for the gluten-indulgent, LOOKS amazing). So I ordered a lobster and steak combo--I know right, who does that? It was amazing, and good to the last drop. So good, I once again forgot to take a picture until I was half way done.

The next morning we went to IHOP; it was in our hotel. They were so incredibly accommodating, and even offered to substitute my bread for fruit; this is a big deal because most breakfast places are pretty strict about no substitutions. Then I got the bill, and realized that for an $20 breakfast, they had better be accommodating ;). I ordered eggs which I specifically requested not be fried in butter; I made sure NOT to order an omelet, because they put their pancake batter in it to make the omelets light and fluffy...yum, right?
Not so photo worthy; but yummy and safe for my tummy. By this point it was breakfast of Day 2 and still no accidental gluten...this is BIG! 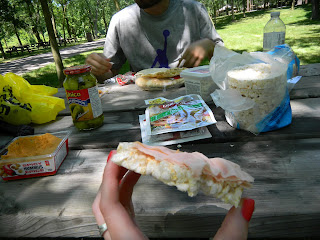 We stopped at a grocery store to get some items for a pic nic lunch, we were heading to Marineland. We spent the morning checking out Friendship Cove, and thinking about how THANKFUL we were that we had the idea to bring a pic nic. There was not a single allergy safe item to eat there; it was all corn dogs, and pizza and hot dogs and burgers...yum, but not for me.
We made it back to the hotel and desperately needed a coffee after all that walking; we were so thankful that Starbucks was right in our hotel lobby; with soy  milk! 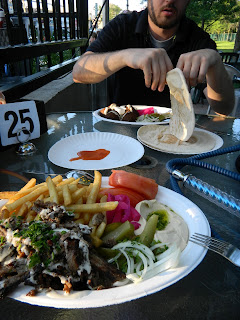 That night we headed out to the main strip and found a Mediterranean place to eat at; the food was nothing short of amazing and gluten and dairy free without having to order any special procedures. Since we have travelled to Israel, we know all about the ingredients and were confident in ordering. I did not eat the fries because they seemed like they might have been coated in flour...but there was more than enough tomato, onion, beef, pickles, hummus and beets to fill me up. It was so nice to sit outside on the strip, watching the tourists and the hustle and bustle of Niagara. 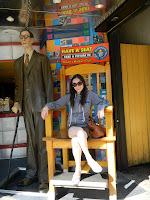 We didn't eat or drink much after that dinner, which is always a sign that it hit the spot. We did check out some attractions, they were definitely something I would do if I went with kids. 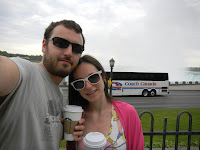 The next day...We went for a pre-breakfast walk along the falls, so magical! We had Starbucks in hand, and yes still with soy milk :). We decided to venture to a local place for breakfast; we found a place with tons of gluten and dairy free options, and filled our tummies. We headed to Niagara on the Lake, where we did not eat a single thing. We were full from breakfast until about 2pm at which point we found a hero burger for some good old fashioned GF burgers.


Posted by Magnificent Minds at 08:09